Posted on March 2, 2015 by cosmosbungalows

So, if you have followed our progress at all during the creation of Cosmos Bungalows then you will know we love animals. So much so, we can’t see one suffer and turn a blind eye.

As a result of this softness our hotel – our pride and joy and only source of income – is over run with furry little creatures rescued from the town of Bira.

Again, those who know us, may well remember an appeal we made before Christmas spurred on by an incredibly unfortunate incident involving our dog Django, and four week old kitten Arsenal. To be brief Django killed Arsenal when he thought his food was going to be compromised by the tiny cat. Watching the poor thing suffer for fifteen hours, having no idea if it would pull through, was traumatising to say the least and we blamed our selves for negligently allowing a big dog to eat in the vicinity of other animals.

After Christmas I, like many greedy bastards, felt massively overweight and decided to rent a tiny room in the village and create a DIY gym. The day after the keys were handed over I opened the door to find a small sack of fur and bones lying on the doormat. And this was the start of Dumbbells story.

This gorgeous young cat was in a bad way. we knew he was totally malnourished, but two days after feeding him up a little we spotted something white and oozy by his back legs. We thought it was puss initially, but it turned out to be maggots. And lots of them. 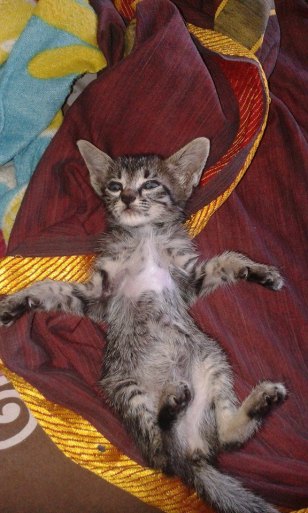 Poor Dumbbell was rotting. Or he had been and the maggots were eating his dead flesh. It was so foul that in order to remove the wriggling shits we had to insert earbuds into wounds on both legs and scoop out the maggots. I’d guess over twenty in all. Which must have been about a fifth of the poor bugger’s bodyweight.

Anyway. I had a massive connection to this kid. He slept with me and I nursed and fed him as best I knew. In hindsight I may also have killed Dumbbell.

In such haste to get him fit and healthy there is a strong chance I gave him too much anti-biotic and his liver/system couldn’t take it. I may be blaming myself over something that was destined to happen, but after Dumbbells death I had a small breakdown – becoming pissed off with the whole situation I booked us on a holiday to Bali we couldn’t afford and subsequently spent a fortune on food and beer while a friend looked after our place.

So, here comes the catalyst for this recent cry for help. Around ten days ago we experienced a huge windstorm which felled ten powerlines, plunging our town into darkness for 48 hours (an exaggeration…but it was dark come sunset for two days nonetheless). As I was purchasing petrol for our battered old generator I saw a friend’s three year old girl playing with a kitten. How sweet that looks when in words. But in reality not quite so.

The youngster, who knew no better, was picking up the kitten over her head and dropping it on the jungle floor. To make matters worse, the poor animal couldn’t see a bloody thing as his eyes were matted together solid with a thick yellow goo….. hence his future name – Custard.

Leaving the petrol I whipped Custard away from his innocent tormentor and took him by scooter back to Cosmos. Once here, we managed to clean one eye that night, and by morning he had cleaned the other himself and looked good as new.

Little Custard proved to be an absolute star. He loved and doted on us like we were his real parents. His favourite places to sleep were wrapped up in my partner’s hair or snout first in my bushy armpit. He was amazing. And we really grew to love him quickly, as did the dogs Django and Rocky who were especially sweet with him.

Just after breakfast, as a large family of Indonesian guests cooked and played in the surf, Custards curiosity for what was going down on the beach below got the better of him. Having never shown an interest in the edge of our terrace before we thought he would be ok playing with the other cats whilst we hid from the noisy antics in our room nearby.

Despite kind guests trying to shoo him away from the edge numerous times, Custard got too close and lost his balance, plunging fifteen metres to his death below. Or not quite death. He died in our arms on our bed as we willed him to miraculously survive.

Again we blame ourselves for being so fucking lazy and not going to see how he was doing, even after we questioned whether he would be ok.

Admittedly I had a day of self-destruct yesterday. Burying something so frail and helpless can do that to you sometimes. Red eyed and pissed off with the world, I left the complex to find solace in beer. Three hours later I returned drunk as hell, with four new pairs of £1 football shorts and a Tinkerbell temporary tattoo on my arm administered by one of our worker’s twin girls at their beachside drinks stall.

Despite one day’s blowout, and an immense heaviness in our hearts that could quite easily result in a fortnight of alcoholism, we decided to change things up. We need to get our now nine felines and two canines away from the high ledge at our property and into a safe location.

If we had a bottomless pit of cash, or even a few quid going spare, we would make these amendments post-haste. As we are completely broke and dependent on guests in order to continue operations during this low season our arms are tied until we become a little busier.

That’s where the generosity of crowdfunding, and hopefully you guys reading this, will be able to help us out…

Our aim is pretty simple. We need to get these babies the hell out of here and into a safer place. We also intend to create enough space in a new location to house whichever animals we come across, or are brought to us, in order to make them fit, healthy and happy.

Despite our heartbreaking set backs, of which there have been plenty during our 10 months in South Sulawesi (three kittens from Toraja we brought with us who died from neglect, the above mentioned babies, and Tika our ginger Tom has not been seen in two months) we have had a lot of success and do a very good job at making these unfortunate souls content. And we can do much more when we get the space.

My wish is to buy a plot of land first well away from the idiots who take it upon themselves to shoot “unwanted’ strays with air rifles. Then buy an old Sulawesi wooden house and reconstruct it on the new plot. 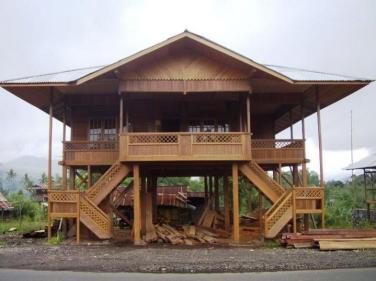 Similar style, but much cheaper and less grand

These houses are stilted. Therefore Ideally the bottom area will be an enclosed living and playing quarters for the rescued animals. The upper floor will be residential for staff and visiting vets who we will encourage to stay in return for neutering, not just of our animals, but in the whole village to avoid over population.

Please, if you can and think this a worthy cause, contribute to our plans of helping these needy imps.

As I write this our eldest dog Django has just returned after almost two days AWOL with what could be a broken leg, but I suspect a highly swollen limb.

Its certainly not all fun and games here at Cosmos for us soft hearted weaklings.

Yet we are committed.

Please click the link below and give generously if you can.

Posted on December 7, 2014 by cosmosbungalows 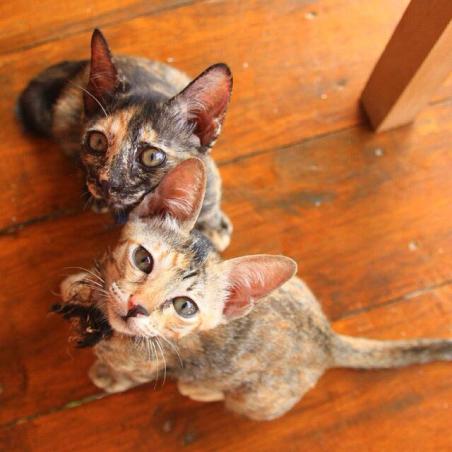 So, the time has come to admit we are a little out of our depth. Not with the business… that’s a piece of piss (please don’t let that cockiness come back to haunt me). But with our growing number of animals.
Yesterday was probably our shittest day in Indonesia. Unfortunately one of the newest recruits to Cosmos’ zoo of waifs and strays – a tiny tabby kitten named Arsenal – got too close to our dog Django whilst he was eating. For some reason, most likely a survival instinct from days in the jungle fending for himself, Django went for Arsenal in an unprecedented attack and shook the poor little bugger in his jaws.
Brave Arsenal battled on, in a state of complete shock, for almost ten hours until his little body could no longer deal with the trauma. He died in our bed at two am Saturday and we subsequently buried him on the beach shortly after.

Although I am mad as hell at Django for snapping, we admit that they should never have been anywhere near each other when food was around. Because all our rescued animals are so peaceful and happy together most of the time we became lax and naive, and sadly Arsenal paid the price.
We need help. We simply cannot afford to create safe zones for our pets, whilst at the same time stumping up for vets and medical fee’s for all the animals that get dumped on our doorstep (In the past two days three ginger kittens, covered in scabs and fleas were thrown in our land. Either that or they happened to collapse in the most sympathetic plot of earth in South Sulawesi. The former I imagine.)
We cannot turn a blind eye like we probably should. We are in a position to help these poor buggers (sort of) and are trying our hardest to do so….even if it could potentially have negative effects on our business in the future;
Ten cats can produce a whole lot of shit.

Please, please help the management at Cosmos in bettering and prolonging these animals’ lives. Not only do we need to get the females spayed at the nearest vets five hours drive away, we also need to build a safe living environment for the cats. One which removes them from the risk of pythons, lizards and also our otherwise placid dog, who has really shown us in the past few hours how ingrained his instincts are and how stupid we were to think our love and affection would make him act otherwise when hungry.